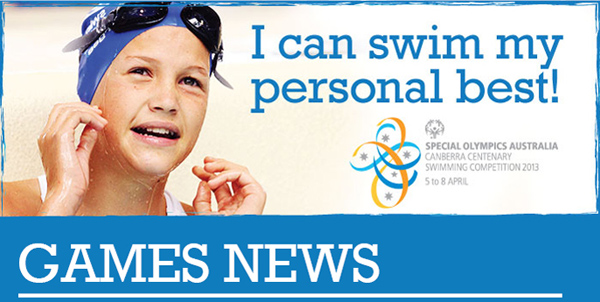 While the Canberra Centenary Swimming Competition is an international event, each Australian athlete will represent their local region and wear the uniform they wear week-in and week-out at regular training and competition. This is something they are very proud of and the first time they have had the opportunity to show it off at a major event.

Click here to download a full list of athletes and officials participating at the Games. Some of athletes, shown below, shared what they are looking forward to.

Abbey is 10 years old and started swimming with Special Olympics three years ago. She loves to race. She completed the Michael Phelps IM Program where she made so many new friends and it helped her to be a more confident swimmer. She recently went to the 2012 Junior National Games and caught up with all her old friends. She also plays netball and goes to nippers. She is so excited and very grateful to her coach Liz for helping her get to the Games. Her dream is to be an Olympian just like her idol Michael Phelps who she would like to meet one day!

Brooke is 25 years old and enjoys swimming, athletics and tenpin bowling. She has been lucky to represent NSW on twoi occasions, first at the National Games in Adelaide in 2010 for athletics, secondly in Cairns for the Trans Tasman Tournament in 2012. For Brooke, to be selected for the event in Canberra is awesome and she says, 'I am just going to go out there and try my best in all my swimming events. I am looking forward to seeing all my friends I see at all the regional and state carnivals, and meeting new friends as well.'

19-year-old Ryan trains weekly in swimming, ten pin bowling and soccer. Having been in Special Olympics for ten years he says his highlight was winning gold at the Junior National Games in Canberra in 2008 and being presented with his medal by Australian Olympic silver medallist, Brenton Rickard. He enjoys Special Olympics because he has made many friends. He is looking forward to competing in his first international event in Canberra, catching up with mates and making new ones.

Louise is 28 years old and will compete in backstroke at the Canberra Centenary Swimming Competition. She loves telling people about Special Olympics, meeting new friends and she is looking forward to competing in Canberra. Louise would like to holiday in Greece one day, which was the location for the last Special Olympics World Summer Games. In the meantime, she enjoys her work at Revesby YMCA where she works as a General Assistant.

Julia is 28 and loves swimming with Special Olympics, so she is really looking forward to competing at the Canberra Centenary Swimming Competition. She is busy as an Office Assistant at DEEWR and hopes that her favourite foods of sausages, bread rolls and salad will be served at the Athlete Village.

26-year-old Amanda is excited about the Canberra Centenary Swimming Competition where she hopes to do well and meet new friends. This Beethoven lover also enjoys athletics and tennis at Special Olympics when she is not working at St George Bank in Kogarah.

Dani, as she is more commonly known, hopes to continue to improve her swimming which she participates in every Wednesday in her local program. She has two jobs and is also studying Retail at TAFE. At just 19 years old her dream is to travel to Paris where she can indulge in one of her favourite foods, chocolate. Until then, Canberra is proving very exciting.

At 18, Claire is taking on the huge task of completing Year 12 at Endeavour High School. But she will take time out to swim at the Canberra Centenary Swimming Competition. She has been swimming in her local program for six years and says, ‘our coaches are great!’ She also plays netball outside of Special Olympics and dreams of visiting Disneyland.

Ryan is 18 and coping with Year 12. He loves sport and will enjoy competing at the Canberra Centenary Swimming Competition. Apart from swimming he enjoys golf, basketball, football (soccer) and knee-boarding. Good luck to his parents and coaches for supporting all of those passions!

Michael is just 15 and has been swimming with his local Special Olympics program for two years. He loves it and will be able to share what he has learned every Wednesday at his first international swim meet, the Canberra Centenary Swimming Competition. He loves his swimming coaches, John and Peter, and is looking forward to proving them proud by showing his abilities in Canberra.

Casey is 14 and in Year 8 at Endeavour High School. Casey likes Special Olympics because she can make friends and her coaches, ‘help me with my stroke.’