Thunder Down Under Lights Up The River

Thunder Down Under Lights Up The River 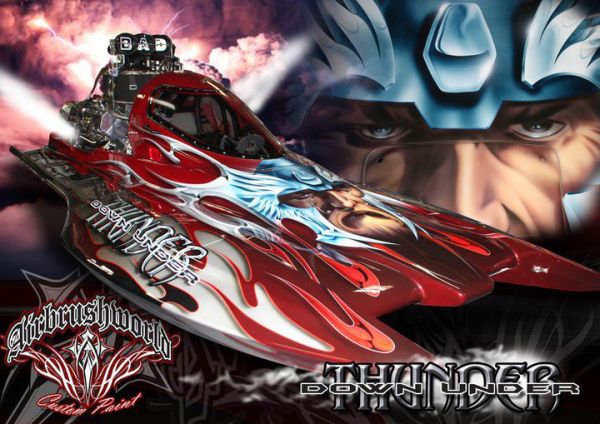 Bangholme, Vic/Aus., 22nd May 2015. The Victorian Drag Boat Club held it last meeting for the 2014/15 season last Sunday at The National Water Sports Centre in Bangholme on a picture perfect day with excellent weather conditions providing a perfect platform for fast racing.

Due to a number of boats currently undergoing repairs after the recent Australian Nationals event, numbers were limited on the day with less than 10 boats fronting up to hit the water. There was only one outboard powered boat among the entries which included the current Australian and Bill Davis Memorial holder in Craig Watson aboard his blown hydro Thunder Down Under.

With the recent heavy rains lashing Melbourne over the previous week conditions in the water were somewhat polluted with floating debris that had club officials flat out up and down the river collecting rubbish that had floated past the catch pontoons maintained by Parks Victoria. Actually the catch pontoons have basically disintegrated over time due to the lack of maintenance which seems hard to believe given the push by communities, environmental groups and governments to reduce pollution entering our waterways and particularly our bays. The issue of floating debris is a huge problem for drag boat racers who at times have only a minute portion of the hull in the water for stabilization. An errant piece of drift wood can be enough to at the very least cause major structural damage or even worse send a boat into the bank.

After some additional clean-up work in the morning by club members the track was declared safe and qualifying got under way around 11am. The river had a slick shine to it with barely a breeze at boats lined up to put down 3 consecutive qualifying passes. Watson who had his full crew on hand had elected to hold back from completing any passes to see what was around in the river. Having picked up the Australian Championship on the river a couple of months back without the aid of steering was still firmly entrenched in his memory bank. Not able to put his finger on it, Watson was faced with major structural damage after hitting what he believed was something in the water. In fact the team only finished getting the boat back together the night before. The crew was ready to go, the small number of spectators was ready for him to go and I was certainly itching to see Thunder Down Under skip across the water.

Qualifying had finally finished with the Thunder Down Under crew loading Watson onto the water for a hit out. Watson left the line hard and kept the momentum going for 50 or so metres and then buttoned off cruising the course at just 40mph. Talking to Watson in the pits after the run he said that it was always going to be an observation run. He still had the thought of floating debris in the back of his mind. The crew got to work preparing the boat for another run in what seemed absolutely perfect conditions. Around 45 minutes was needed to turn around the 540 cubic inch blown Brad Anderson powered boat. Watson had indicated that the day was being used just to check out the boat after having made substantial repairs and wasn’t interested in any sort of elapsed time or speed.

Something changed between that conversation and 10 minutes later as Watson was being loaded onto the water. One of the crew members Jarrod walked past and casually said “he’s getting on it”. And on it he did! Sitting on the water holding the rope Watson felt comfortable enough with the water to have a crack. The procedure for these types of enclosed boats is to steady the boat in a straight line, let go of the rope, close the hatch and hit the gas. All in a couple of seconds. The hydro type boats have an enclosed driver’s capsule that breaks away from the boat in the event of a high speed crash providing added safety protection for the driver.

Having completed all of that, Watson hit the gas and from the moment Thunder Down Under lifted off the water Watson was on a mission. The boat sounded crisp as over 3000hp belted out of the funny car style headers with barely any part of the boat maintaining contact with the water. Thunder Down Under was on a mission as it raced across the top of the water leaving behind a massive rooster tail that just seemed to hang in the air. 400 metres later and Watson had just recorded a 198+ mph pass much to the delight of the commentator, the crew and anybody who was within earshot of the river. What an extreme sport drag boat racing is with Thunder Down Under the best going around.

Thunder Down Under completed the last official pass for the 2014/15 season wrapping up what was another successful season for the Victorian Drag Boat Club. If you ever get the chance to watch drag boat racing do so as this extreme sport is simply mind blowing.

To find out more on the Victorian Drag Boat scene go to:

Thunder Down Under Video Package