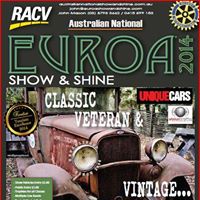 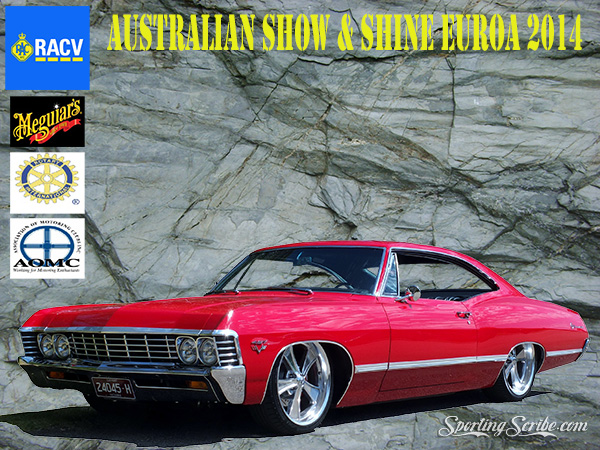 Euroa, Vic/Aus. 7th October 2014. Once again the Australian National Show and Shine at Euroa was a big hit with fans as thousands cruised around the 100’s of cars and bikes on display in the idyllic parkland setting.

With the forecast of a sunny mid-20’s spring day, car enthusiasts from across the state cruised into the picturesque township of Euroa to cast they eyes over some outstanding customised and historical machinery. Local craft and market stalls lined the streets offering up a variety of local hand made goods as well as the customary food and drink outlets. Even the kids were catered for with dodgem rides and for the more adventurous a camel train ride.

Everywhere you looked there was a story to be told about the origins of a vehicle with some going way back. One of the marquee vehicles on display was a hand built fibreglass car inspired by the late French style 1930’s cars of the time. Taking to the creator and manufacturer of the Devaux I asked David how this all come about “well it’s something I had on my mind for a while and set about designing a car that was unique and not a copy of anything. I got my inspiration from the late 30’s French style cars and worked my way from there” he said. Being a truly unique vehicle the mammoth task of producing just one vehicle was an enormous task with the heavy reliance on quality tradespeople to complete their work within the construction time frames.

With the tear drop look about the car it was decided to build the panels out of fibreglass and although time consuming to set up the casting moulds the method was considerably cheaper than building aluminium panels. With David’s vision of producing more vehicles over time the fibreglass panels proved to be far more practical than hand building aluminium panels each time.

Every vehicle produced was hand built in the Melbourne factory with a build time of approximately 12 months full time. A total of 7 vehicles were built for customers with a price tag of $190,000. Although this example runs a 4.0 litre cross flow 6 cylinder Ford engine, all the other vehicles produced ran an aluminium Leyland 4.2 litre V8 engine. An automatic transmission supplied the drive to an independent rear suspension set-up with coil over shocks.

David likes to get the car out as much as possible and usually goes cruising at least every fortnight. With the enjoyment now in driving the car any thought of going back into production is just that, a thought. “It so hard today to make the project viable with the cost of marketing, expert trades reliance, programing, manufacturing floor space, the list goes on” he said. For now it’s just cruising in the Devaux. 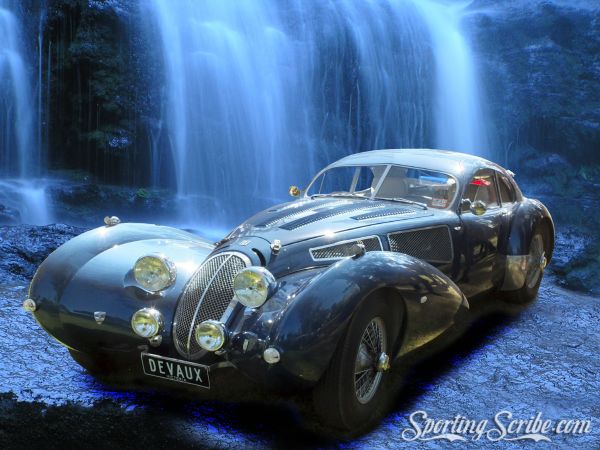 A feature of the display was this hand built creation

Set up beside the Devaux was a homemade Moke that had a story to tell. Having travelled across the equator 5 times and the Arctic Circle 6 times the vehicle has the tag of being the most travelled homemade car in the world. Adventurer Chris was happy to give out a few stats on the life time journey. “Yeah, where do we start. I drove around the world for 6 1/2 years visiting 129 countries and covering 367,000 kilometres. The car has been over the Equator 5 times and to every point of the globe” he said. Chris added “the car runs on vegetable oil, cooking oil or basically anything we can throw in her” he said. As a feature of this year’s Show and Shine Chris was quite happy to share his incredible adventure with the many curios spectators that lined up to find out more. 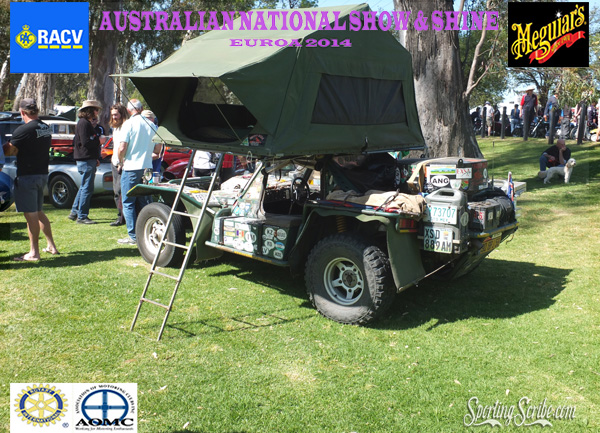 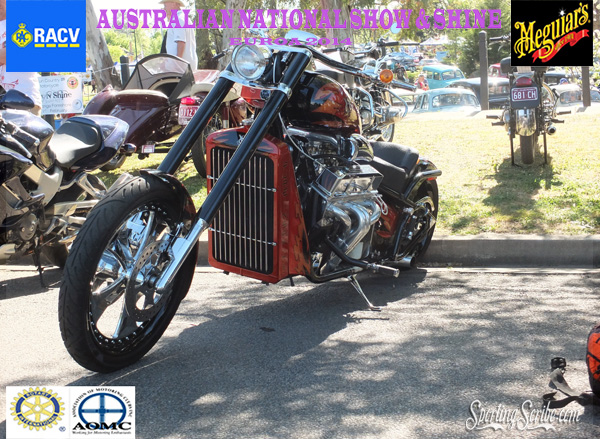 Chevy powered motorcyle. What a rush!!

Just over from the Wayne’s chopper was Gary Jenning’s 1947 Indian Scout. Originally used by the Australian Army Gary purchased the bike a few years back and got about taking the bike back to its original glory. Now sporting the original burgundy color Gary has increased the engine capacity to 750cc courtesy of a Harley Davidson crank. “Yeah I went over to the dark side and put some Harley parts into her. At 500cc it was just a bit slow going over hills but now having 7500cc underneath me the bike is just a dream to ride” he said. The bike is carrying a few battle scars from Gary’s mis-adventures but that hasn’t curbed his enthusiasm to get out a couple of times a month to go riding. 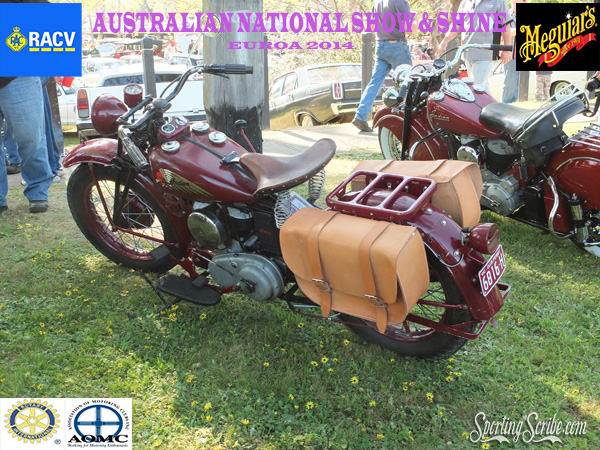 Although there were plenty of interesting vehicles on display one that caught my eye was a 1928 Chevrolet van owned by Wayne from Sunbury. Wayne has a handyman maintenance business and regularly uses the van for work. Originally restored by Don the Handyman, Wayne purchased the vehicle from the Bendigo swap meet some 6 years ago. Flat out at 74kph running through a 3 speed gearbox the 4 cylinder Chevy is not your ideal tradesman’s vehicle but Wayne says he gets the van out as much as practical. “Yeah it gets plenty of interest when I pull up out the front of a National bank to do a maintenance job” he said. Wayne added “people like to get photos taken standing in front of the van which can be quite funny at times” he said. Sitting inside the van it was quite easy to visualise the 20’s and 30’s and what the times would have been like back then. Certain vehicles can send you back in time and Wayne’s Chevy van was certainly one of them. 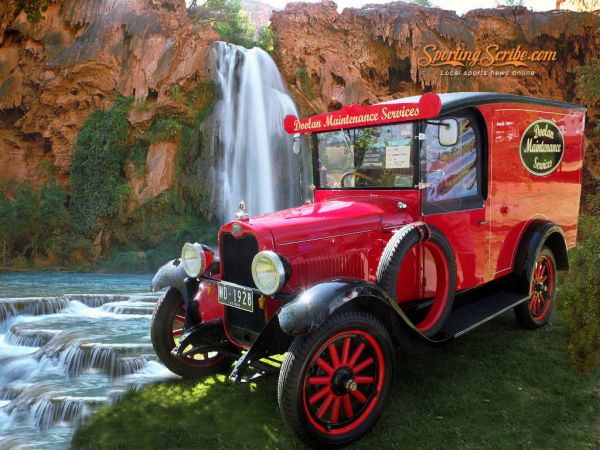 Anyone need a job done?

Another 3 hours was spent walking around the incredible display of vehicles with no doubt a story to be told about every single machine. Sponsored by the RACV, the display and setting was memorable and one not to miss next year. For more information on the event go to http://www.australiannationalshowandshine.com.au/ 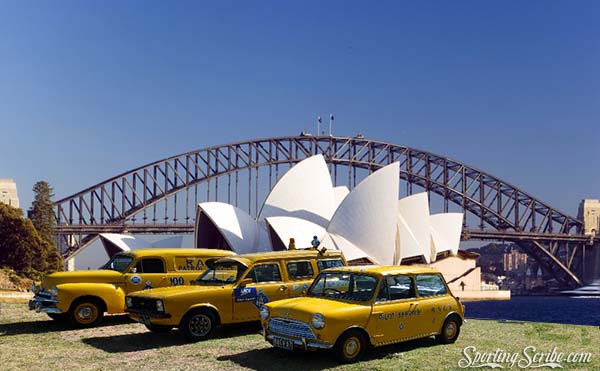 IMAGES FROM THE DAY