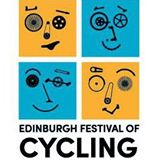 The third Edinburgh Festival of Cycling will be held from 11 to 21 June. The Festival, it is a real showcase of all aspects of bicycle culture. The jam-packed 10-day programme featuring not just bike rides and races, but talks, films, drama, art & photography exhibitions, family events, and workshops. Among the rides there are several new rides, including the inauguration of the Capital Trail, a long distance mountain biking challenge, and two new Audax rides aimed at beginners and families. There will also be rides and events for children and families.

The festival will feature inspiring speakers such as: Shannon Galpin, National Geographic Adventurer of the Year, talking about her work in Afghanistan using the bicycle as a vehicle for social justice. Juliana Buhring (the fastest woman to cycle round the world) will be giving a Q&A after the Scottish première of ‘Inspired to Ride’ the new film about the 4,233 mile Trans America race, in which was the first woman to finish (and fifth overall). Also, new at the Festival is the powerful new drama ‘The White Bike’ by Tamara von Werthern, who was  inspired to write the play by the death of Eilidh Cairns who was killed as she cycled to work.

This years Festival of Cycling will see the return of the Original Edinburgh Night Ride, for  its 3rd year, this is a supported ride which has been described as a magical mystery tour from Edinburgh to East Lothian and back through the mid-summer night – this ride sold out for the last two years. As well as the Bike Curious Family workshop – showing families how bikes can be the perfect transport solution for children of all ages. Also, returning for its 2nd year, Women’s Cycle forum, an evening of discussion, inspiration and networking on how to build a better world.

In addition to all this there will be plenty more to do including, a literary tour, rides and tours for all-abilities, novice riders, children and the elite, workshops, exhibitions of art & photography, various workshops, including one where you can build a bicycle from scratch using bamboo to make the frame, and public meetings.  Throughout June, ‘Pedalling past: Edinburgh’s Cycling Heritage’, explores Edinburgh’s cycling heritage in a free exhibition at the Central Library, through historic photographs and other material from the collections of Edinburgh Libraries and Museums and Galleries.

The Festival also caters to the increasing amount of people commuting in Edinburgh. The Spokes’ Bike Breakfast will be free to all who arrive by bike and features a range of stalls, speeches, security marking and servicing for bikes at the Edinburgh City Chambers. The Brompton Fold-Fest will have prizes for the quickest in town to fold a Brompton bicycle at Biketrax and at the SEStran Commuter Challenge participants will set off from Ferrytoll, Ingliston, Straiton and Newcraighall by car, bus, train, tram, bicycle, or jogging/walking and head for St Andrew Square, to see which mode is the fastest and causes the least environmental damage.

Louise Haston, Commonwealth Games double Silver medallist said: "Over the past few years cycling in Scotland has gone from strength to strength and it's great to see events such as the Edinburgh Festival of Cycling taking place, especially for the 3rd year running.  Events like this are key to getting people of all ages and abilities involved in cycling whether it be for sport, leisure, to stay fit or have fun! There are some fantastic events on this years calendar, I can't wait to be involved."

Director of the Edinburgh Festival of Cycling, Kim Harding, says “This year we are bringing you our strongest programme yet: With more rides, including the new Capital Trail and two new Audax rides. More films, including the première of ‘Inspired to Ride’ with a Q&A with one of the stars. Great talks, such as 'Pedalling a Revolution' by Shannon Galpin, founder of the nonprofit organisation Mountain2Mountain, on her social justice work in Afghanistan, a country where there is a cultural taboo against women and girls riding bicycles. Also,  Emily Chappell a cycle courier taking on the world, and  Swiss mountain biker Gian Liesch. The powerful new drama ‘The White Bike’ by Tamara von Werthern, plus books, photographs, workshops, rides and more. Did I mention the rides?”

Held across different venues around Edinburgh, more information on all events of the Edinburgh Festival of Cycling and tickets are available online at www.edfoc.org.uk. The Festival can also be followed on Twitter at @edfoc, on Facebook at EdinburghFestivalofCycling, on Instagram at @edfoc and on Flickr at edincyclefest. The hashtag for the event is #edfoc2015.

The Edinburgh Festival of Cycling is supported by Sustrans, Sestran, The City of Edinburgh Council, Spokes and the Edinburgh Bicycle Cooperative. Booking information and contact details for all events can be found on www.edfoc.org.uk, the online brochure can be browsed at goo.gl/TYrM6z.